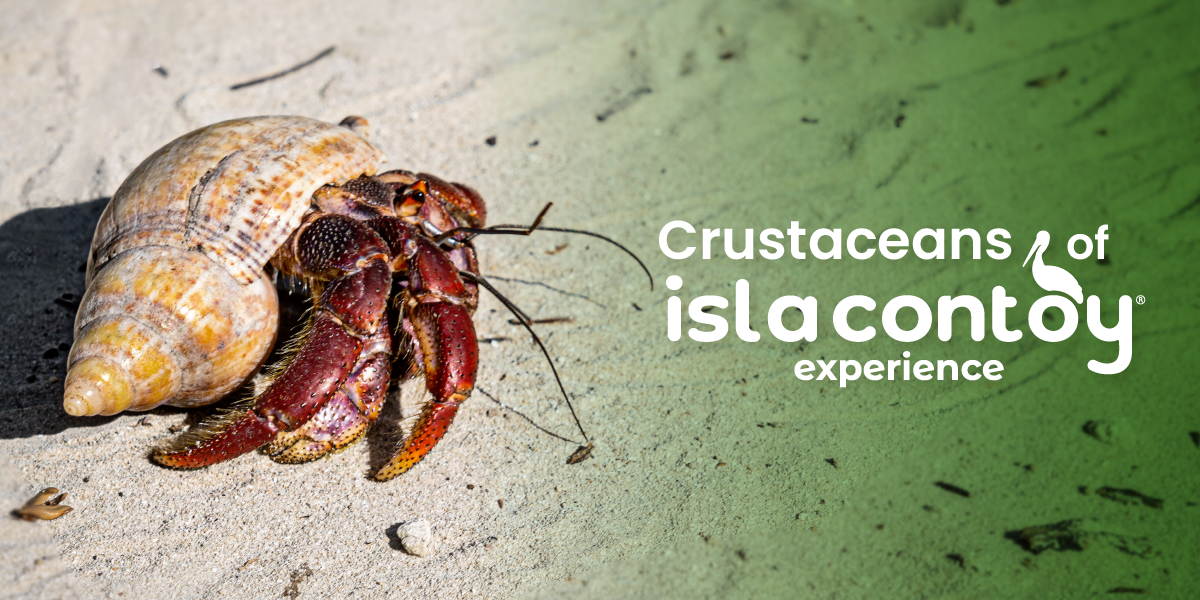 Isla Contoy is known as the island of birds; however, you will be surprised to know that the first thing you will see will be crabs, lots of them. Read on and find out all about the 6 most popular crust aceans of Isla Contoy.

Since Contoy is a protected island, all animals are free to move wherever they want. While the birds are shy, the crabs, especially the hermit crabs, move around even inside the museum and in areas where people circulate. That is why it is very important to be careful when walking the trails.

When visiting Contoy, you are 99% sure to see hermit crabs passing close by, so let's learn a little about them and the other island's crustaceans. 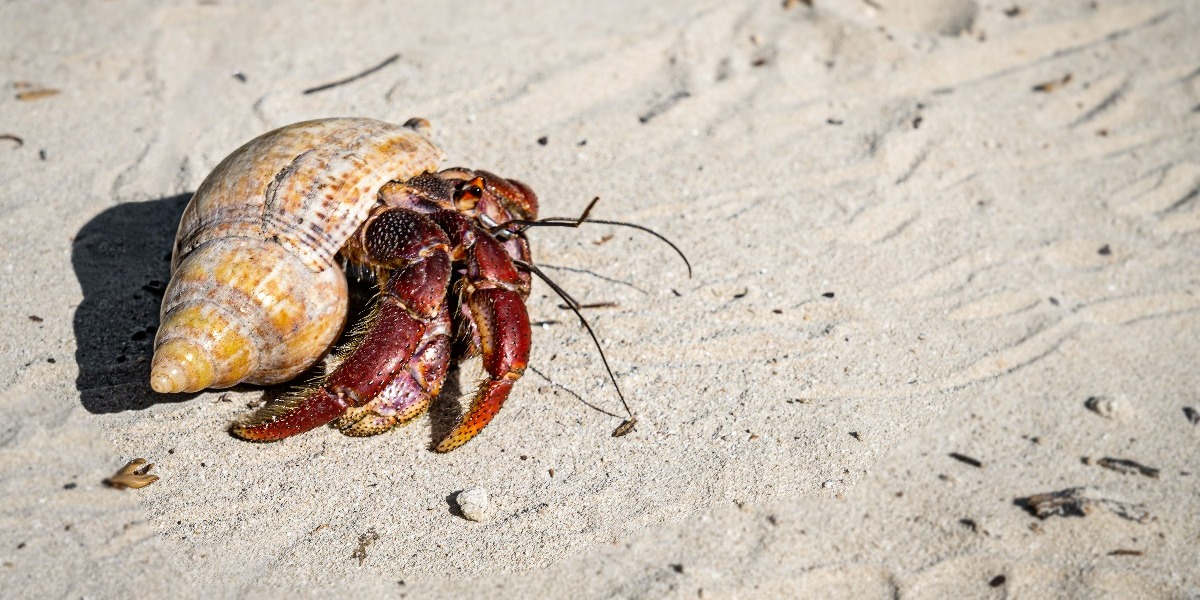 Crustaceans are a type of arthropod with a segmented body, usually protected by an exoskeleton. Their name comes from the Latin crusta and aceum, meaning crust and relationship, respectively.

Fossils of the first crustaceans date back to more than 500 million years ago and are still very similar to today's crustaceans. Their size can vary from microorganisms of approximately 100 micrometers to enormous specimens of up to 4 meters, such as the spider crab. In addition, they are among the species with the highest level of survival and adaptation.

Currently, there are more than 67,000 species of crustaceans discovered and probably many more remain to be discovered. Their diversity is so great that it has been a challenge for zoologists to categorize them correctly.

Here are the 6 scientific categories into which crustaceans have been classified:

On the island, we will find mostly land and saltwater crustaceans. Let's see what they are: 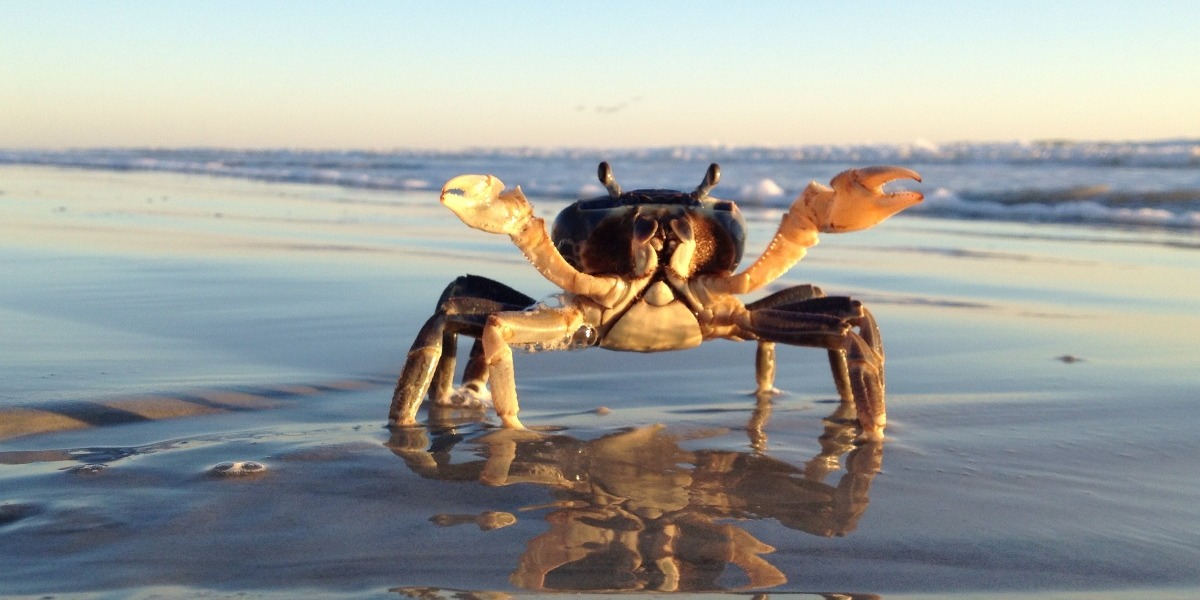 These crabs are abundant in the mangrove shore area and are famous for their (you guessed it) characteristic blue color. They have 10 legs, two of which are dimorphic (different sizes) chelae or claws. To put it in perspective, their body size varies between 11 and 35 centimeters, and their largest chelae can measure up to 15 centimeters,

They are herbivorous and find their food using light and sound detectors. During the night, they feed on leaves, fruits, coconuts, and mangrove leaves.

It takes them up to 4 years to become adults and requires molting their exoskeleton more than 60 times to reach their full size, almost 3 times more than most crabs. Their mating time varies according to lunar cycles. 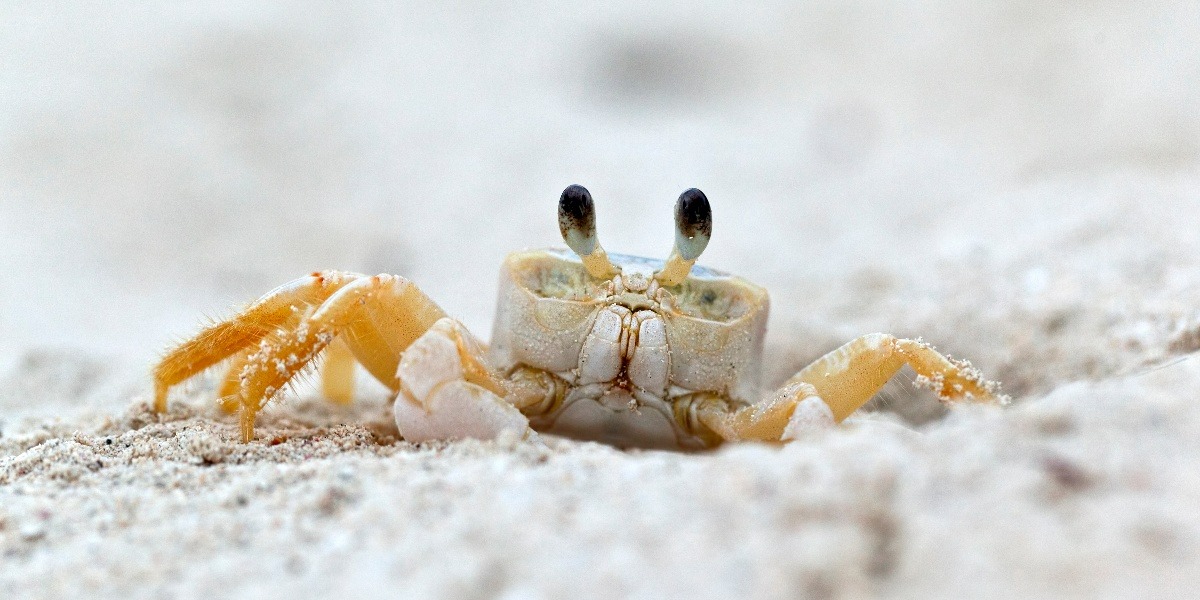 Like the blue land crab, this small decapod has a pair of dimorphic chelae. Their size is small, about 5 cm, and they are yellowish with white.

This species usually walks with its 4 pairs of walking legs, but when in danger, it can reach speeds of up to 20 km/h and run with only the first pair of legs.

Unlike other crabs, their mating season is year-round. They dig burrows to hide in on hot days and are most active at night. 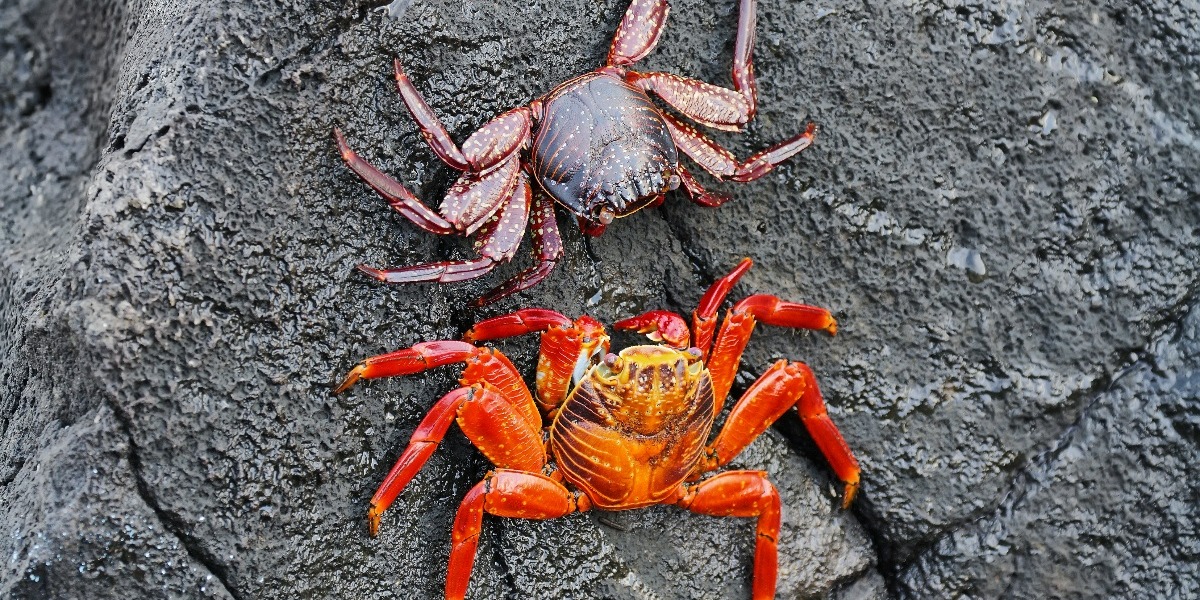 The red rock crab is usually found in the Pacific areas of Mexico, Central, and South America, including the Galápagos Islands.

This crustacean has the classic shape of a crab, with 8 legs and two symmetrical claws. Its limbs are flat and only touch the ground with the tips of its legs. The size of its shell is about 8 centimeters.

A young red rock crab is black or dark brown, while adults may have reddish and brownish tones with pink or yellow spots. 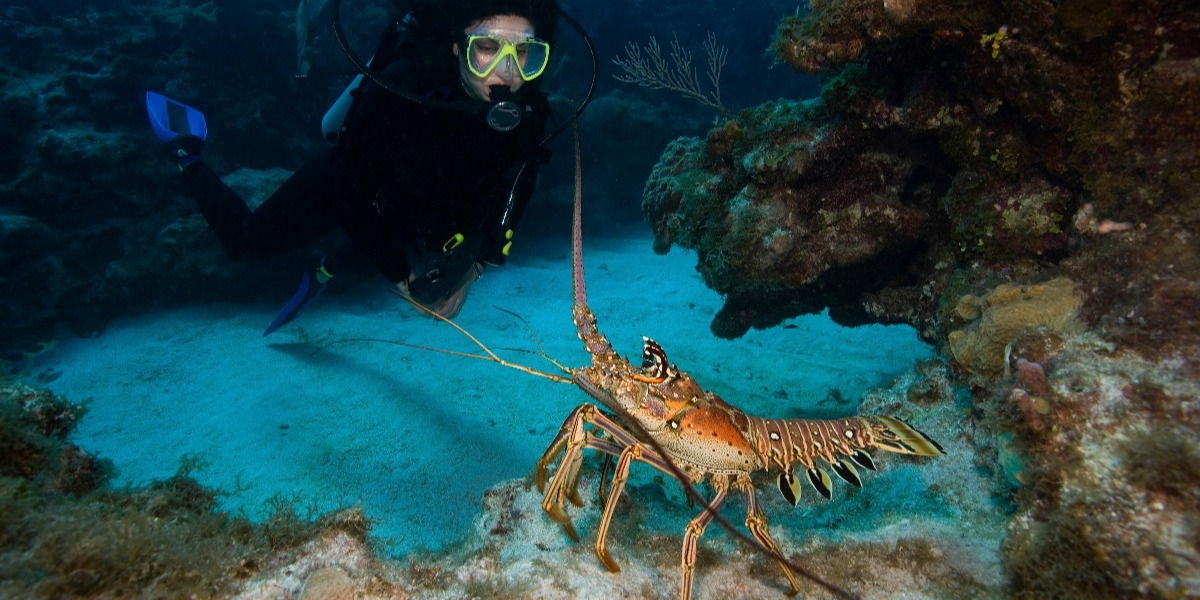 The Caribbean lobster, also known as the spiny lobster, is a type of crustacean that lives in reefs and mangroves.

This species measures about 20 centimeters, but specimens up to 60 centimeters in length have been found. Its body is long and cylindrical and covered with spines. It has 10 legs and two large spines that resemble a pair of horns. They are usually green or brown with reddish, white, and black spots. They also lack spines. Furthermore, they inhabit depths of 30 to 90 meters and prefer habitats with some cover for protection during molting periods.

Among the marine crustaceans, the Caribbean lobster stands out as one of the most valuable fishery resources in the regional trade. In Isla Contoy National Park, regulated fishing of this species is allowed under the following specific conditions: 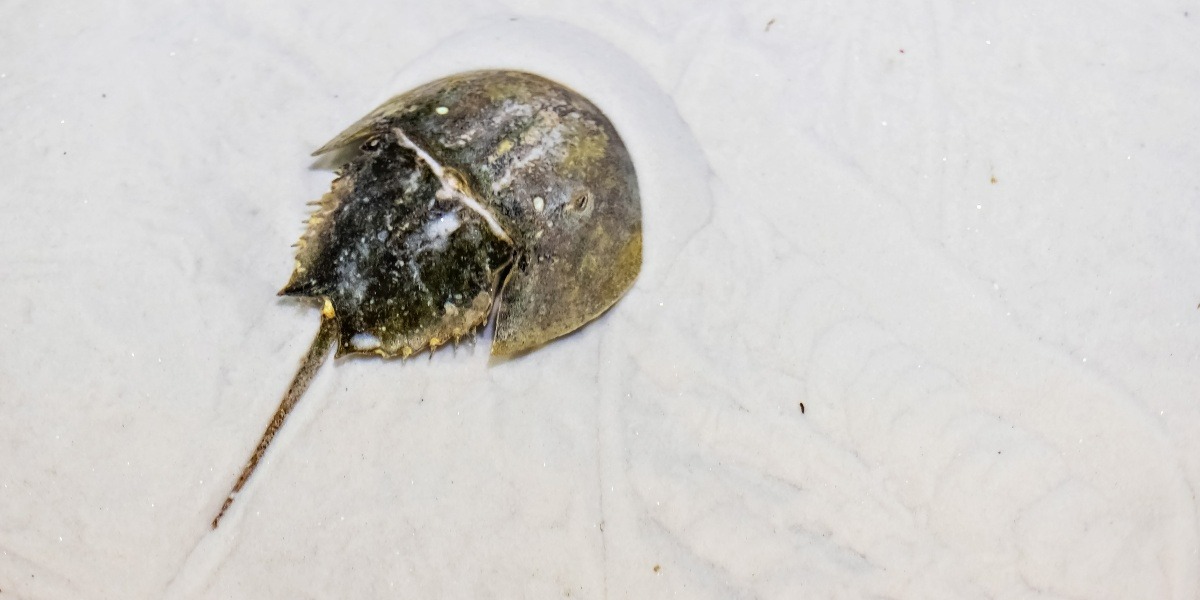 This crustacean, which looks like something out of a dinosaur movie, is actually older than dinosaurs. They were around 450 million years ago, and their body shape has not changed much since then, which is why they are also known as living fossils.

To the naked eye, the horseshoe crab has a rigid dome-shaped carapace with spines and a stinger-like tail that protrudes from the back.

It has 5 pairs of legs and a pair of pincers. Its body is composed of two tagma or parts: the head and thorax (prosoma) and the abdomen (opisthosoma). They can measure up to 50 centimeters long and live between 20 and 40 years.

This species inhabits shallow waters with soft sandy soils and feeds on mollusks, crabs, fish and algae. In winter, they migrate to the beaches to reproduce, and females can lay up to 80,000 eggs distributed in several nests.

Unfortunately, although this species has managed to evade its predators for hundreds of millions of years, it is currently in danger of extinction. The most common cause of their disappearance is human activity. Since the mid-twentieth century, the little panfish has been fished for use as fertilizer, bait and for medical exploitation related to its copper-rich blood. 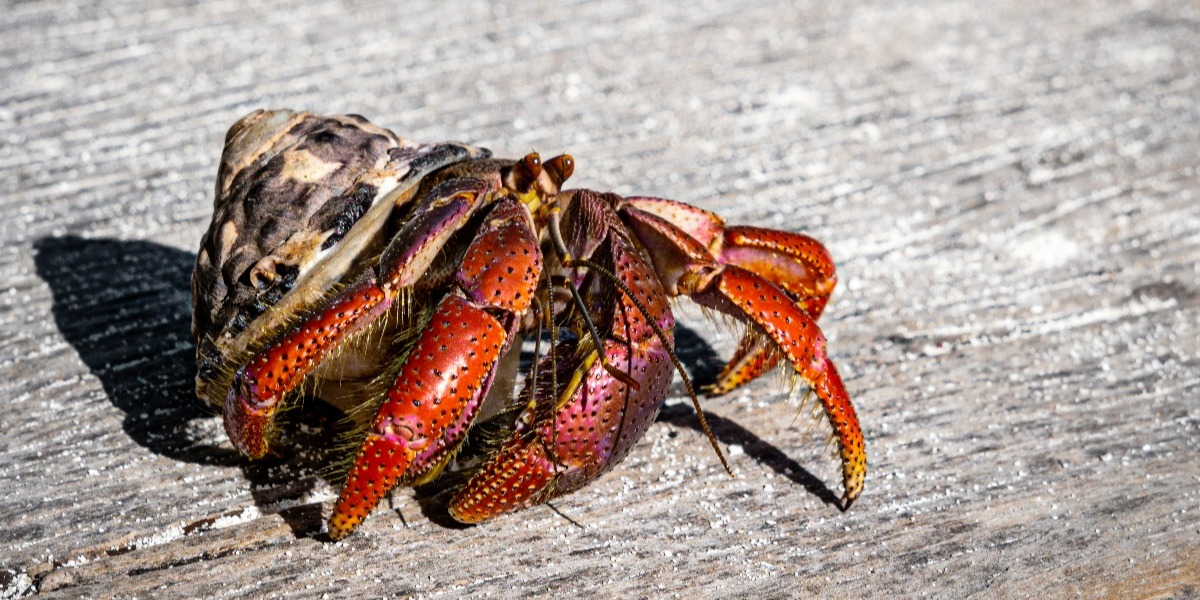 We can almost guarantee that the hermit crab will be the first crustacean you will see when you arrive at Isla Contoy. These little guys are famous for using shells for shelter and changing them as they grow.

Hermit crabs have a rigid exoskeleton at the front but a softer abdomen than other crustaceans, which they protect by curling up inside a shell. Some crabs, not satisfied with the protection of the shell, make a symbiotic relationship with anemones that protect them from predators.

Their diet consists basically of anything, as they are scavengers. They mate only twice a year and have hundreds of offspring. Their personality is curious but also shy.

Are the crabs and lobsters of Isla Contoy dangerous?

No. Crabs will not attack you unless you touch them and play with their claws (which is forbidden). In fact, when walking around the island, you must watch your step, or you might accidentally step on one of them.

If you want to take a close look at these crustaceans, don't miss the opportunity to visit Isla Contoy, a virgin island protected by the government that preserves its original ecosystem practically intact. Here you will also see birds and enjoy one of the most beautiful beaches in the Caribbean. 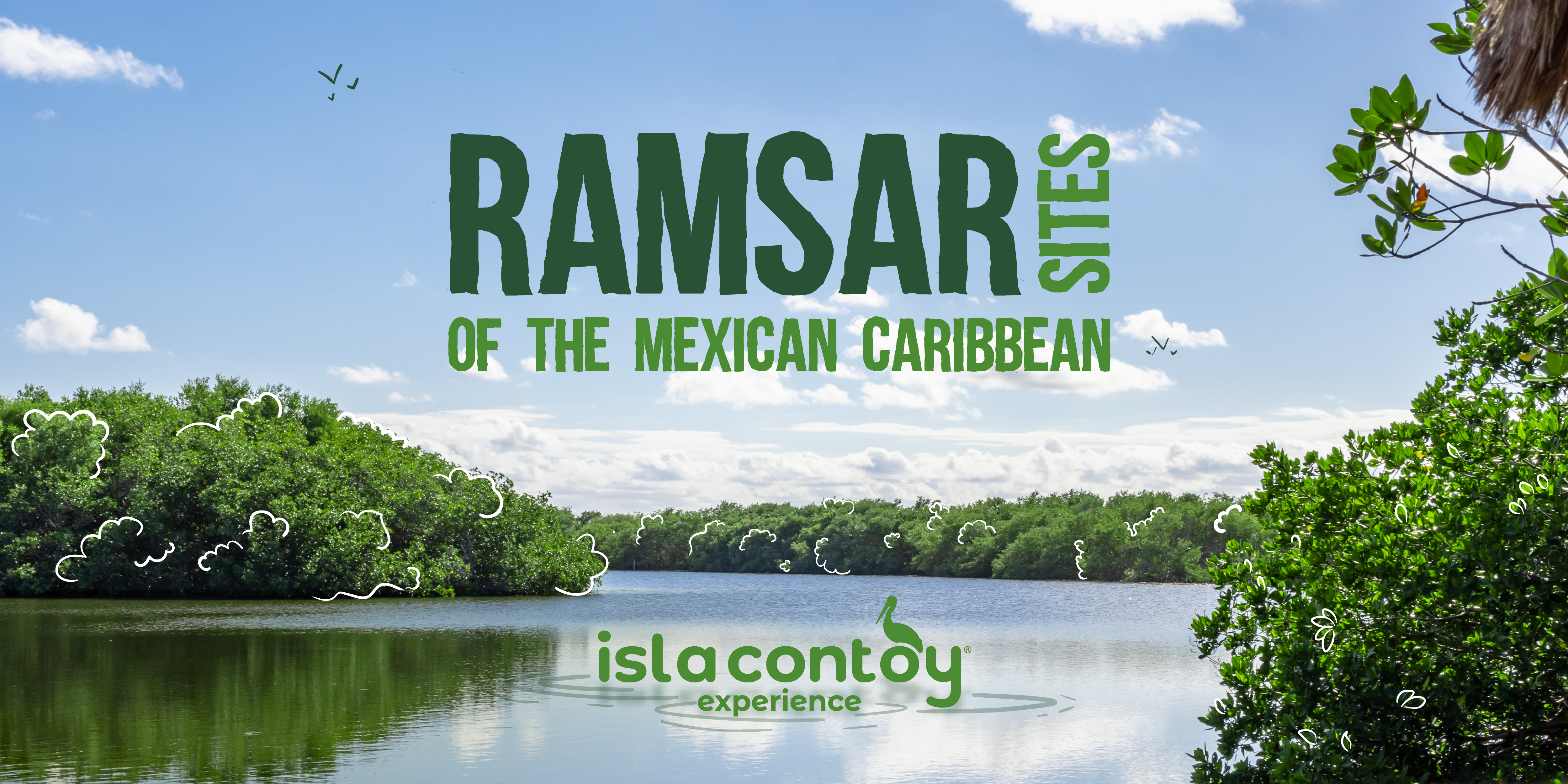 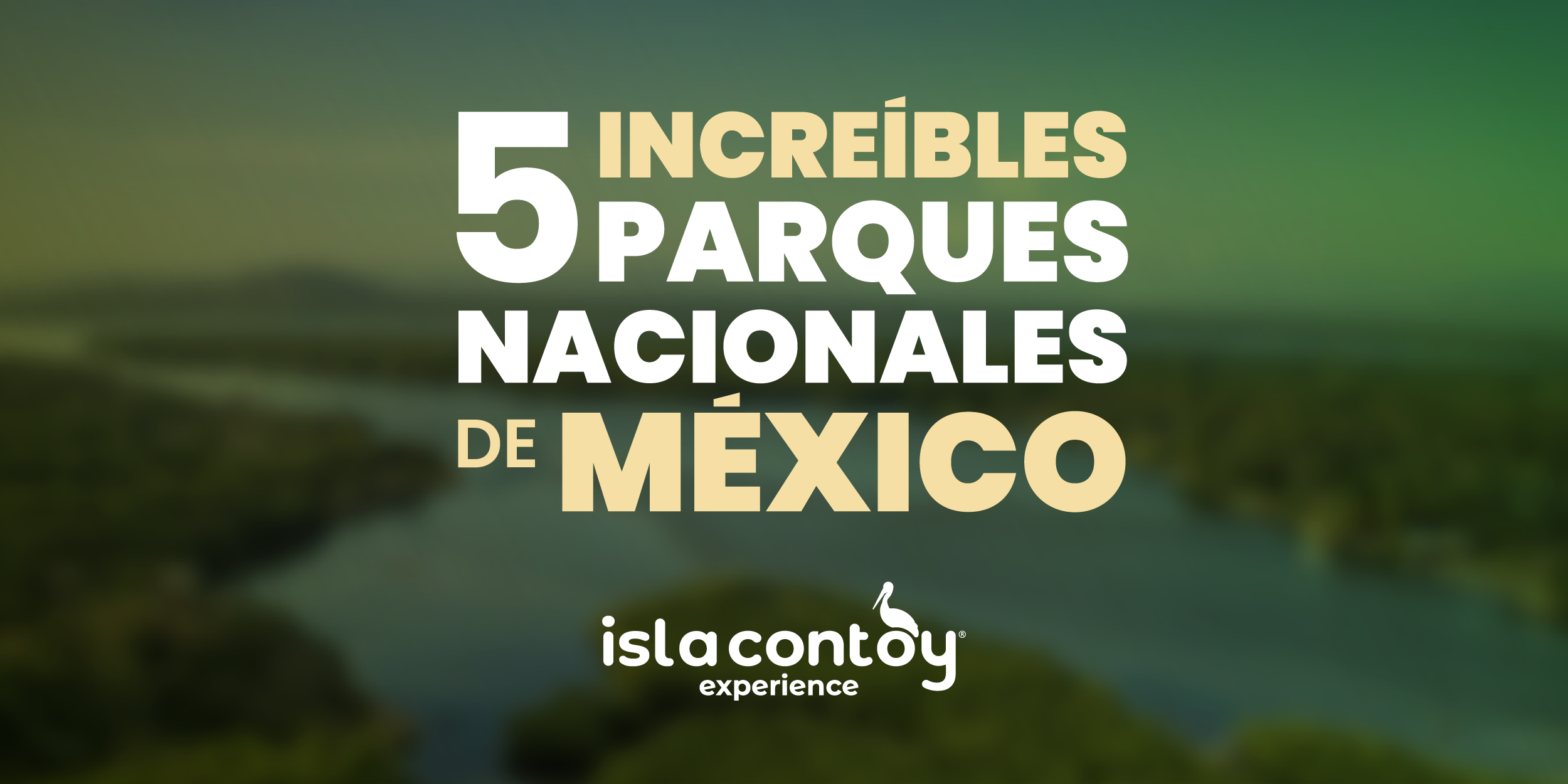